Where is the value in Art?

There are very few things in life that hold as much value as art. Property and Gold hold economic value, but only Art and Antiques hold both cultural and economic value. However, art does have a similarity to Money in the sense that paper money has no real physical value other than the value the bank attributes to it. Gold, on the other hand, has both physical and financial value, its physical value comes from its rarity and the cost of mining it. If you were to take every ounce of gold ever mined from planet Earth and put it all in one place you would have enough to fill two Olympic sized swimming pools. That doesn't sound a lot does it? When you consider that the device you're reading this on has gold in it and more and more electrical good every year contain the metal, we can start to understand why its value has rocketed in the last few years. Art, on the other hand, has its very essence of value wrapped up in the reputation and creative genius of its maker. That is where we assign financial and cultural value in art.

Emotion is another part of cataloguing value in art, how much a person connects to a painting or sculpture can very much affect how much they resolve themselves to purchase and never sell it. Although the main attribute of value will always be the reputation of the artist, which goes a long way to substantiating the social and cultural importance of the work. We can have artists with names like David Hockney, Jeff Koons, or Banksy, all of whose works are all increasing in financial value at tremendous rates on a year to year basis. The idea of art being a concept, of being something which is born of pure creativity is what makes it so interesting. On the other hand, this can also be culpable for making it difficult for people to understand, and at times, even connect with; particularly with contemporary pieces. We've had people come into the gallery and not fully grasp exactly what it is they're looking at. They struggle to understand what the artist is trying to convey, I have known people in the industry who take it out on gallery visitors who may raise an objection to the oversimplification of a piece of art. When in reality, the blame purely lies in the gallery owner, or the salesperson, who has done such a poor job in conveying the artist's intentions and their sentiments to the viewer.

With art there doesn't necessarily have to be a narrative, there is no narrative in abstract art. Abstract Expressionism was a movement, where it was based on colour, opposition, form, and was very much about capturing sentiment or expressing feelings. It wasn't about telling a story, or about painting an image of a setting, or something that we see every day. This is what was beautiful and rare about abstract expressionism, or abstraction in general. However, narrative can play a very important part in art, the narrative tells a story, and gives the viewer an idea of exactly what is going on in the painting. When we look at certain paintings from history, particularly around the Victorian period, many of these paintings have a narrative, they're either telling stories of Greek mythology, Royalty, the upper classes, or even the lower classes in different settings and different situations. It basically captured a frame of how people lived during those times.

In the modern-day, our narrative comes from many different places. If we take Banksy, for instance, his work has a very strong anecdote, which flows through it. We see this in the murals that he paints onto walls via stencil. With these paintings, his narrative is very much of the political and social agenda of the time. He expresses his personal political views through the artwork. Although it's not entirely just about him preaching. He tries to raise awareness of situations, often with a comical twist. His early work in Bristol was very much about the growth of government surveillance. If we look at some of his famous pieces, for instance- the one he did outside a public phone box, he painted two police officers listening in to the phone box so they could hear every conversation in there. Indeed those early works were extremely powerful and riddled with social commentary. His most recent works have all been climate-based, and that is the genius of Banksy that he can tap into how people feel, what is important in society, and make people connect with his work so that they see value in it. He finds a way of producing the art that celebrates or castigates the world we live in, it's always an equal measure; a balance if you like. Banksy attains a new record for a painting at Auction - so he shreds the piece in front of everyone - Balance. 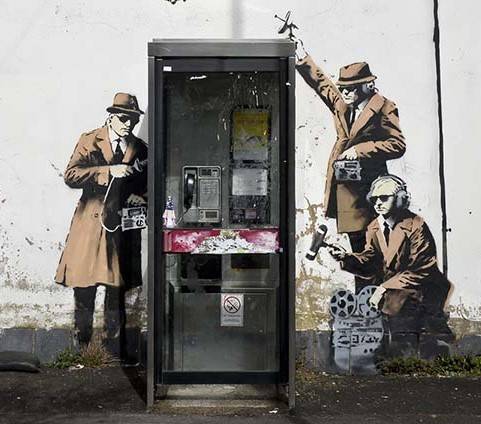 Artists like Jeff Koons has taken the Pop-Art ball and run with it. From its early conception by the likes of Andy Warhol, James Rosenquist and Robert Rauschenberg, his brand of art is very much in three dimensions. What we see from his work is colour, shape, and commerce in everyday objects or actions. Andy Warhol had his factory where he produced all of his screenprints, photography, and paintings. Koons has a similar studio where he has many artists, all producing the work that he conceptualises. Some regard this as an affront to the very creative process. Some say it is a natural extension of what Warhol was trying to achieve. Whether one group is right or the other, the only thing that isn't in doubt, is Jeff Koons ability to sell large scale pieces of art to both public and private collectors. Koons, once again, took back the mantle of most expensive living artist from David Hockney last in 2019. And although this title doesn't hold much water in creative circles in the art world. It certainly means that you are the top of the pile when it comes to commercial art.

So, what we have to consider with paintings, is the intrinsic value. We have to think about this with all art. When we look at bronze sculptures, (if we leave the value of the artist and the creativity to one side) we can see that there is an intrinsic metallic weight value in the piece, that even if the artist doesn't press on with their career there is value in that metal content. However, the likelihood is that if an artist is good enough to be working in bronze and being able to afford the high cost of casting and producing bronze statues, then they will certainly have a good following that will see their value increase over time. The flip side again, is when we look at paintings, they don't really have any intrinsic value. It's a sheet of canvas stretched on a wooden frame, or panel of wood which is covered in oil or acrylic paint. The finished product is framed and hung on a wall. If you broke it down to its base cost for a Vincent van Gogh painting, you would see that the actual cost of producing that painting would be very little indeed. Comparing this to its value in the auction rooms, you can see that Van Gogh paintings produce massive amounts of money regularly. You also see that something which may cost around £50 to £100 to produce is valued at around £75 million.

Again, this is a difficult concept for people to accept, but that is the value of true creativity and popularity. You always have to count the years that the artist spent training, the years of struggle to be recognised or accepted, the years of honing a craft. In Van Gogh's case that never happened in his lifetime, he died thinking himself a failure having only sold one painting in his lifetime. This is one of the true tragedies of the art world. You must consider that every canvas is stared at, sweated over, scraped off and started again, thrown across a room in some cases. I remember an anecdote about Francis Bacon who had been torturing himself over a canvas for weeks, changing it, starting over, constantly fighting with the tones and colours in it. In the end, he conceded defeat and went to the pub where he asked his friend to go to the studio and destroy the painting by cutting it up and removing it from the stretcher. On his return to the studio, he was horrified to see the painting still there, he asked his friend why he hadn't done what he asked, his friend replied, he had and the painting was in a bin bag outside, when Bacon looked at what was in there, it was a painting that was completed and ready to go for sale. Needless to say, the friend was thoroughly castigated for the mistake, and Bacon returned to the Pub to further drown his sorrows.

Once a painting is made. It is impossible to replicate it exactly, it is truly unique. And although an artist may do variants of a theme, that does not necessarily mean that they will be able to copy each painting exactly. The value in art can take many different forms and although a painting may not physically be of great significant value, we can see that a great concept along with a true and steady brush, and the marriage of those two things, can produce the most incredible and important, social, and economically valuable art. We're talking about works that will captivate audiences for generations, just as the truly great artists always have.