Historically, winter has been a great time for artists to capture and express the various feelings associated with the coldest time of year.

It offers many differences that the painter can capture and gives them a completely different palette of colours, which often brings new ideas and challenges.

Over the past century (in England), we have seen many weather changes leading to the gradual disappearance of the archetypal "White Christmas", which has since become a forgotten event. Nowadays, Christmas is usually a mild affair (most likely raining), but I can't remember the last time I looked out of the window on Christmas day to see the fields and streets covered in a blanket of crisp white snow.

Artists tend to paint what they see, while some choose to create their vistas from imagination and flex their creative muscles to produce an aesthetically pleasing image, and let's face it, who doesn't like snow? Ok, I'll admit I'm not the biggest fan of snow when I have to go somewhere, but the idea of being somewhere snowy at Christmas certainly appeals to me.

Let's take a look at some great artists and their renditions of Winter. 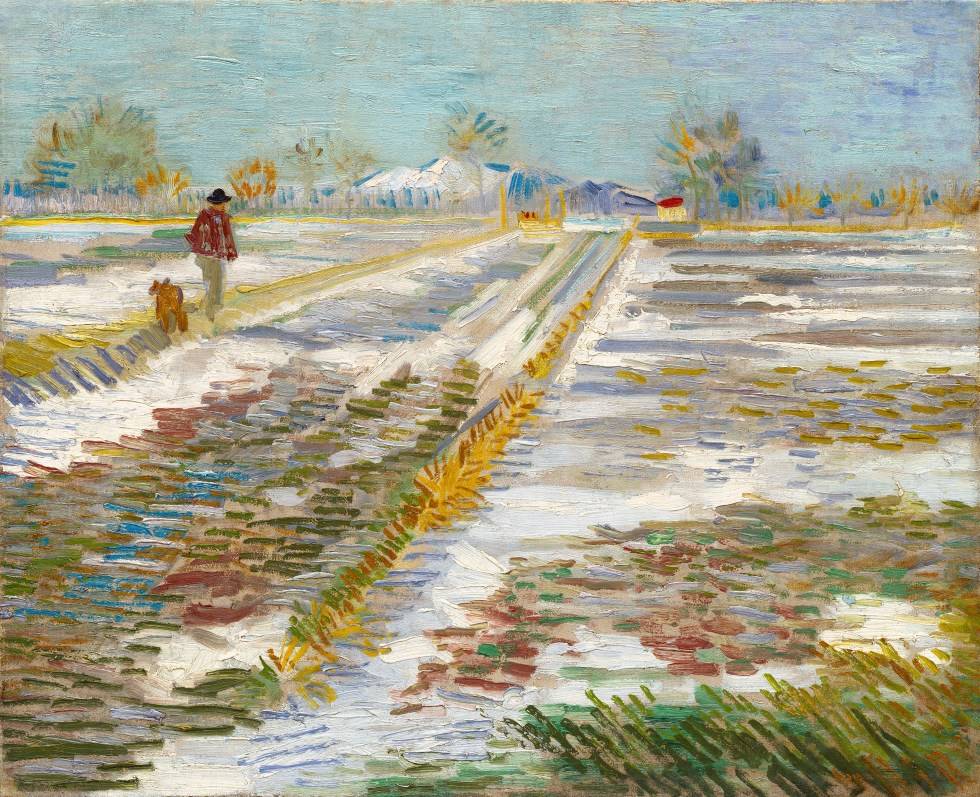 We begin with Vincent Van Gogh and the first painting produced during his highly successful and somewhat infamous stay at Arles.

"Landscape with Snow" was painted in 1888, and here we can see a lone figure and a dog making their way across the white fields. Vincent is depicting what he sees, and although we can tell that there is snow, it doesn't cover everything, in fact, his palette is quite varied with this painting. A cursory glance shows us that he uses blue quite a lot on the canvas, blue being a cold colour, it works well not just for the sky but for the footpath also. I'm sure that the footpath didn't have blue stripes running across it, but for some reason, Vincent's use of this style works.

The rest of his palette consists of red, green, yellow, brown and black. Within those colours, Vincent mixes different shades and tones to cleverly emphasise features in the landscape.

As always with Vincent's paintings the simplicity of his style impacts hard on the viewer, at a time when people craved beauty and romantic narrative from their art, Vincent chose the mundane and realistic, and whilst it had a narrative, it wasn't the popular choice of the day. Nonetheless, this is a stunning painting and can be seen at the Guggenheim museum in New York.

During the Winter of 1874/75, Argenteuil was dealing with a severely cold weather front and was under a heavy blanket of snow, this spurred the then resident of the town, one Monsieur Claude Monet, to produce no less than 18 paintings of the inclement weather.

Not only do these paintings have cultural importance but they also demonstrate great meteorological significance in the way that they mark the weather during these years, and when compared to our winters of the 21st Century we can see a stark difference. 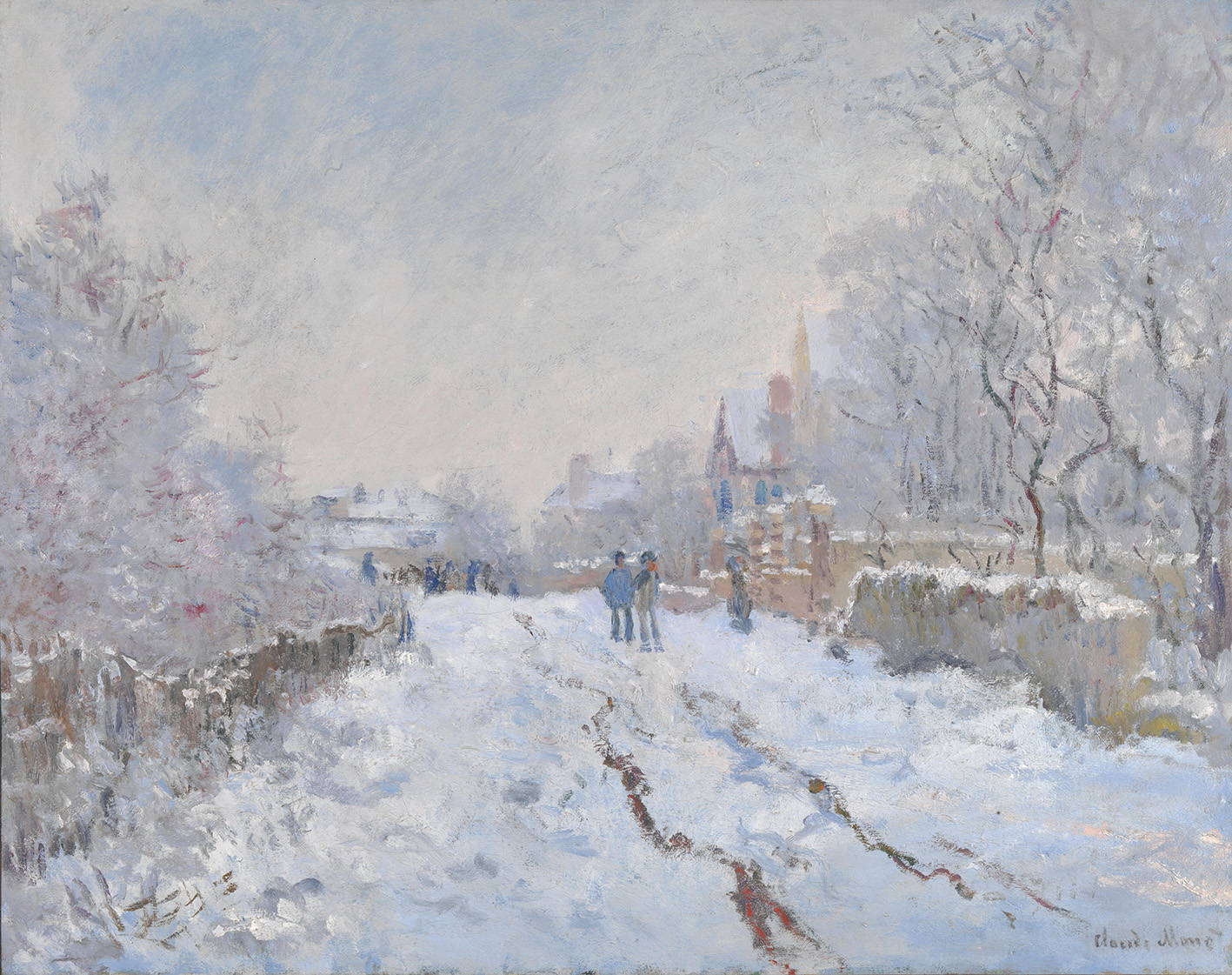 Snow at Argenteuil 1875, is a painting I've had the pleasure of viewing at the National Gallery in London, just before the pandemic dug its claws into our way of life. I was mesmerised by its simplicity, yet its relentless impact on me was something from which I struggled to walk away. His palette is relatively simple, yet the master mixes his paints, subtly darkening and lightening various parts of the canvas to reveal a cohesive image. If you look through the trees, the sky, and the ground, there's very little difference in these areas with the tones; they almost seamlessly sit next to one another and work harmoniously to unravel the scene. There's a tremendous delicacy to this painting, as if the paint just fell onto the canvas, much in the way the snow had fallen that winter. 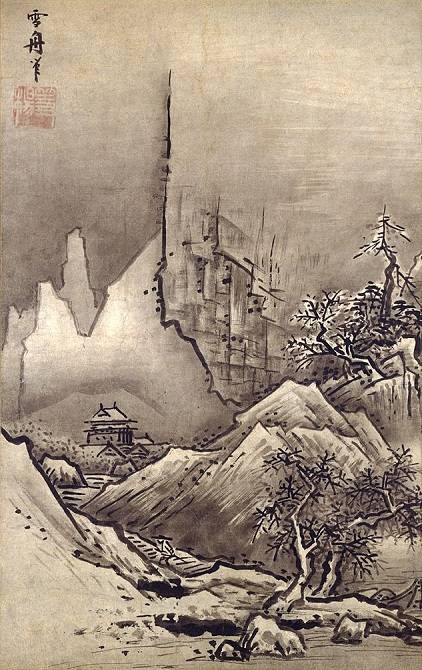 Next, we move across the globe to Japan, a country synonymous with its seasons. From the beautiful snowy winters to the Sakura (Cherry Blossom) falling from the trees to herald a new phase of the year, sakura symbolises spring, hope, beauty and new life. Every year millions of Japanese people take to the parks and forests to be near these beautiful trees to celebrate the change of the season. The Japanese people like to celebrate the new seasons, welcoming all the challenges from the hot summers to the cold winters and (difficult) rainy seasons. One artist, Sesshu Toyo, made one of his standout works around the changing of the seasons. It is a beautifully and delicately created work of art and massively important to the history of Japan, having been created in the late 15th to early 16th century; and rightly designated a national treasure. This work should be viewed from the bottom upwards, starting at the boat on the bottom right-hand side.  From here, we can unravel the narrative and follow the story along the footpath to where a figure makes his way up the hillside, towards the castle. The trees are bare, and the man is huddled in multiple layers of clothing to stay warm. With no use of colour, Sesshu gives us the experience through the trials of the figure making his way to the castle and all the clues we need from the natural environment. This is an extremely clever work of art, many centuries before its time, and would go on to inspire artists from all over the planet.

Of all the Barbara Hepworth editions I have had and sold over the years, this one has escaped me. I've never seen a copy of it or owned one before. For me, it is the standout piece of the series 'opposing forms'. Winter Solstice, is a screenprint on paper by Dame Barbara Hepworth and is a beautifully constructed winter image. Created in 1975 by the artist, we have an abstract winter scene, not a rarity in the field of abstraction, but a wonderful work of art nonetheless. The winter solstice also called the hiemal solstice, or hibernal solstice occurs when either of the Earth's poles reaches its maximum tilt away from the Sun. This happens twice yearly, once in each hemisphere (Northern and Southern). Here we can see the pastel colours that Hepworth has used to accentuate the winter months, we don't need to see snow or figures wrapped in coats. Abstraction is about giving a feeling from the image presented, and Hepworth gives us some clues to her subject in the geometric landscape and depiction of the sun and moon, quite typical of a sculptor. In the way of detail we don't get much, but we know what we're looking at, we can feel the coldness from the colours and we recognise the moon immediately. Works like this show us why Hepworth was considered one of the 20th Centuries greatest artists. 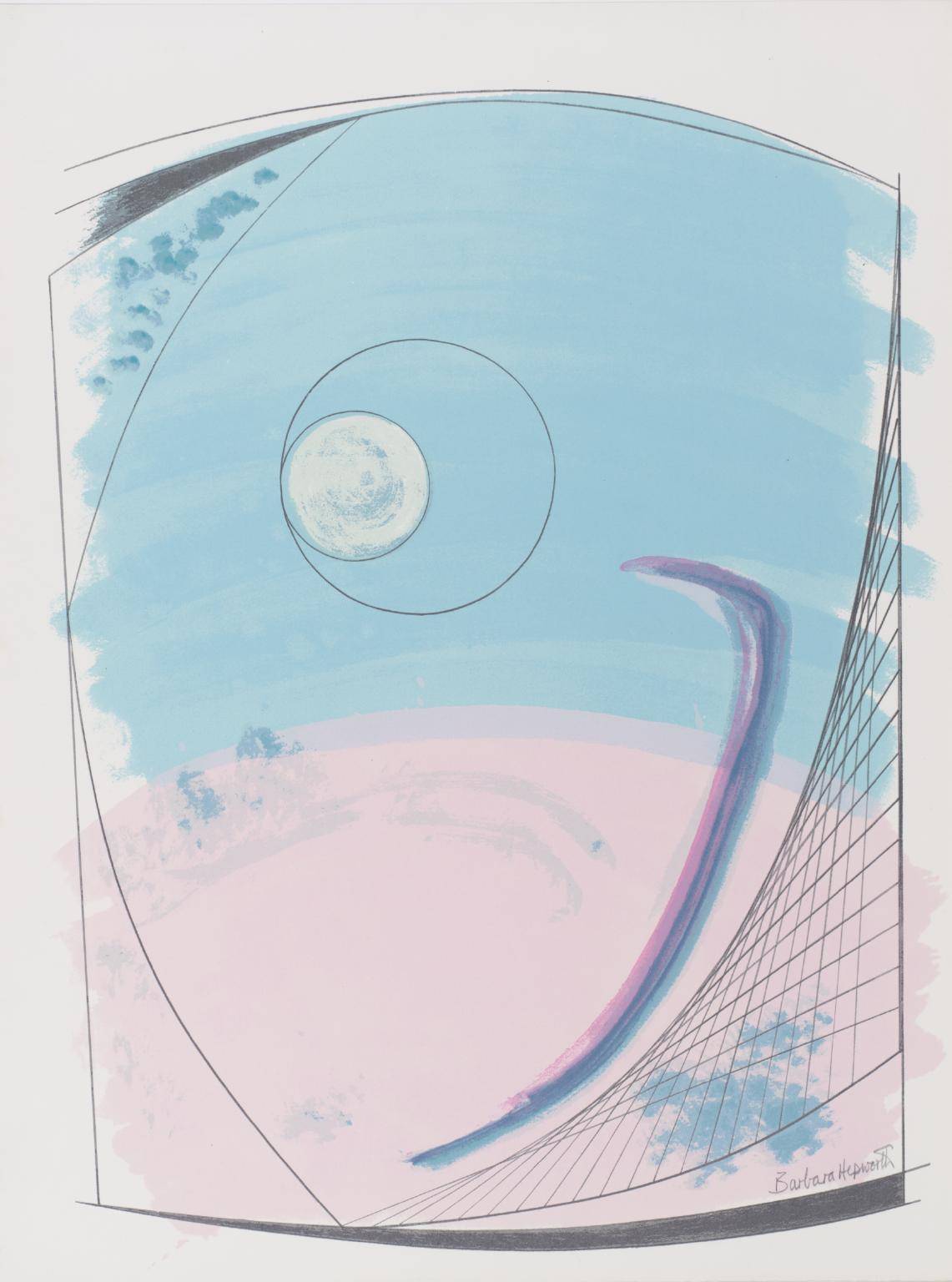 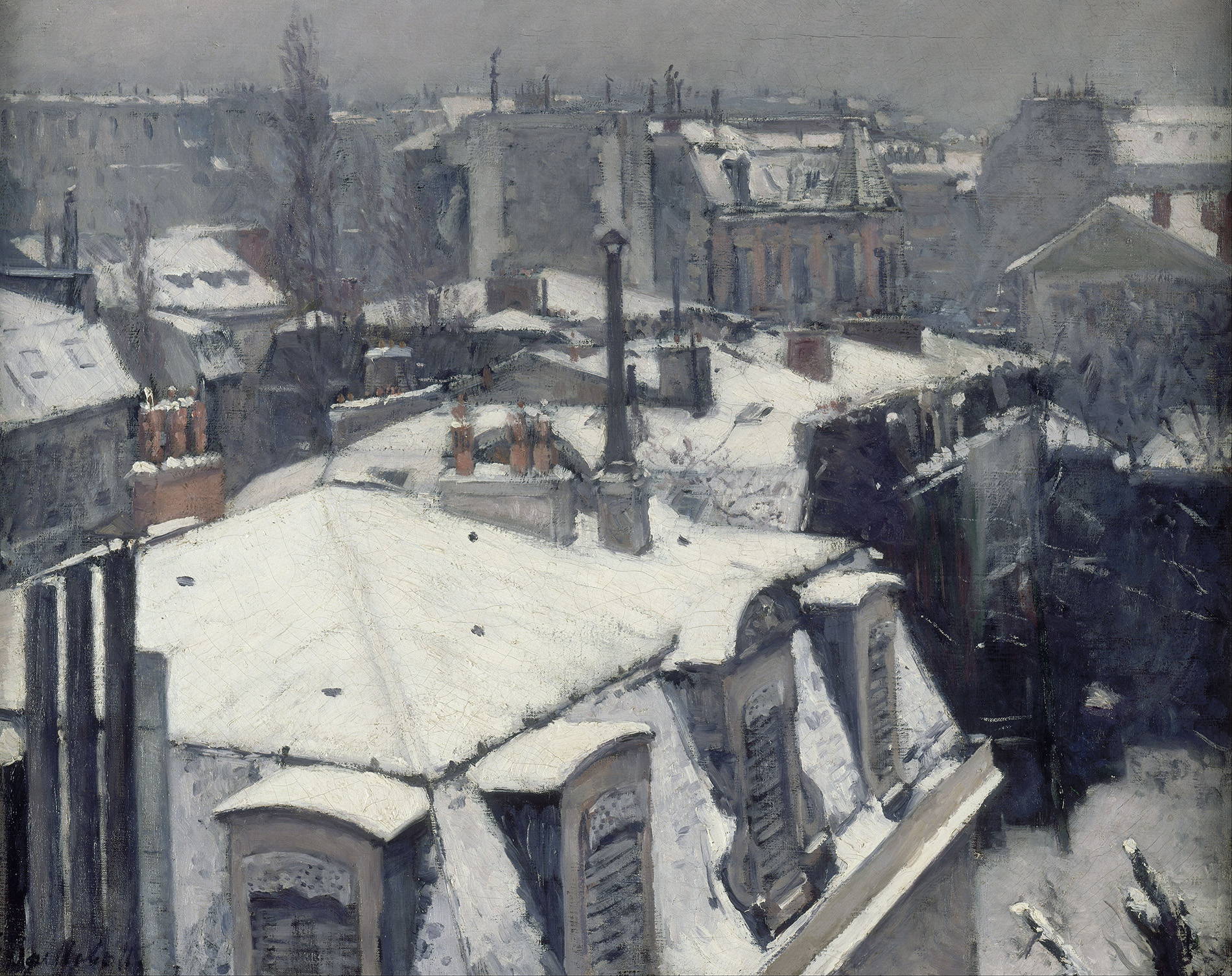 Last but certainly not least, we have a fabulous painting by Gustave Caillebotte, titled Vue de toits (Effet de neige) or in English - View of Rooftops, effects of snow. Caillebotte was one of the French Impressionists, maybe not as famous as certain other artists in that group. If you asked a person in the street to name an impressionist painter, I'm sure they would reel off several without mentioning him. This however should not be the case. As we look at the composition it's immediately noticeable that we view the scenery from a bird's eye perspective, giving us a high position above the rooftops of Paris during a cold snap of winter. Created during 1878/79 the painting is so beautifully constructed using brushstrokes with such assured composure, the sheer depth of talent screams in our faces that this artist was a person of immense talent and creative genius. Through his careful brushwork, we can see the chaos of colour and geometry in the city which is wrestled into order by the blanket of snow.

Chimneys and trees protrude high above the rooftops, almost like eager children who know the answer to the teacher's questions. The ambient lighting in the painting is quite muted in this example, we can see a heavy snow-laden sky of grey at the top of the canvas, which gives us a beautiful tonal juxtaposition against the greys of the buildings, and the white of the snow. This painting was originally gifted to the Musee Luxembourg by the artist's brother but was later acquired by the Louvre in Paris, and in 1986 it would move again to the Musee D'Orsay where it can be found today.

These were a few of my standout choices of artwork depicting winter, and I know that I will no doubt have missed out a lot of wonderful works from this short blog.  I hoped you liked them and that it may have brought to light, in equal measure, the similarities and differences in these wonderful works. After all, this is what art is capable of doing, reducing the creative to the bare bones of humanity and showcasing our similarities rather than our differences.

All Images are mine unless otherwise stated.
All opinions are my own and not De Lacey Fine Art Ltd or any other company or body.