The Greatest Mystery in Art...

The artworld has many mysteries, who is Banksy? Was the Salvator Mundi actually painted by Da Vinci? Was Van Gogh's death a suicide or accident? and so on. This business has a peculiar habit of turning up more questions than answers, even looking at a painting one can be plagued with such inquisitions. What did the artists mean? why did they paint with these colours? what emotion does it convey? The artworld is littered with such questions, but there's one artist and their legacy that stands out more than any other.

To find out more, we have to travel East, we also have to go back in time to the late 1700s in the Edo period of Japan, which was a fascinating and often brutal time. Japan has always been an island of extremes, from the weather to the warring factions, nevertheless from all that pain and hardship has blossomed a truly unique culture and many beautiful works of art. The 18th century in Japan was a period of much hardship, it began in 1703 when there was an Earthquake and Tsunami. Not to be outdone, just four years later it happened again but in 1707, Mount Fuji also erupted in a volcanic geyser of lava which continued for sixteen days. 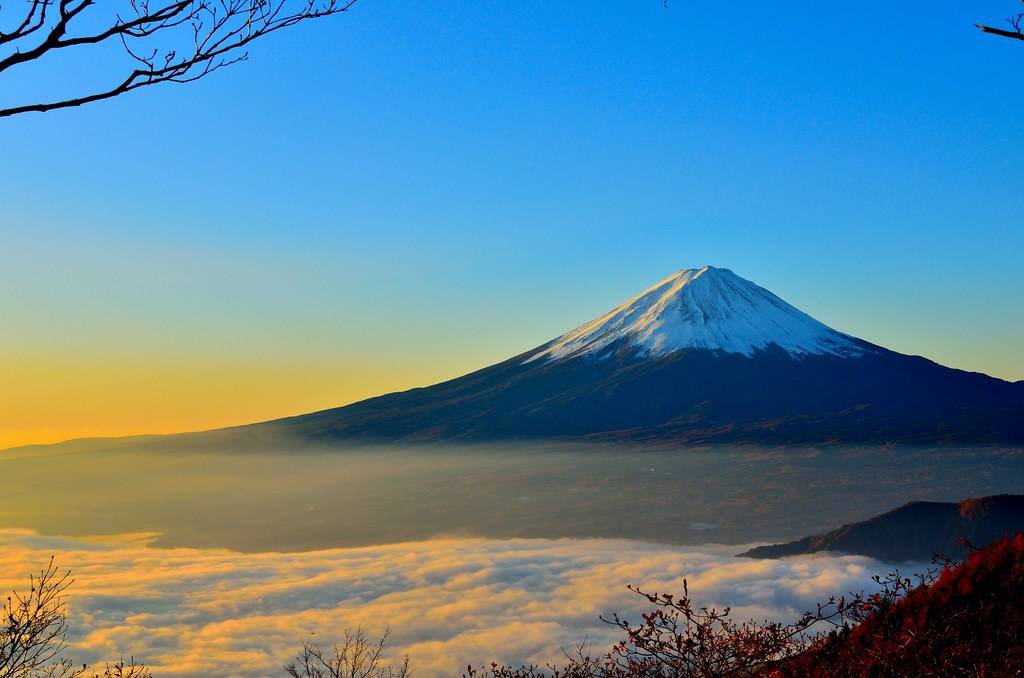 In 1732 the country was ravaged by famine, an estimated figure (which is quite broad) being of between 12,172 and 160,000 people would die of starvation. In 1771 yet another Tsunami would hit the mainland and result in the deaths of an estimated 8,500 people. Things didn't improve from here, and in 1782 another famine hit the country, this time it was considered to be one of the worst in history lasting six years, and resulting in the deaths of an estimated 20,000 people. The last flourish of this unfortunate century happened in 1792 and began with a (yes you guessed it) earthquake which was followed by a Tsunami. This time the earthquake triggered another Volcano in Mount Unzen which caused a domino effect of collapsing the Mayuma Dome in front of Mount Unzen and resulting in a MegaTsunami that would take the lives of 15,000 people. So now you understand when I say that the 1700s were a difficult period for the Japanese people, I'm not exaggerating. 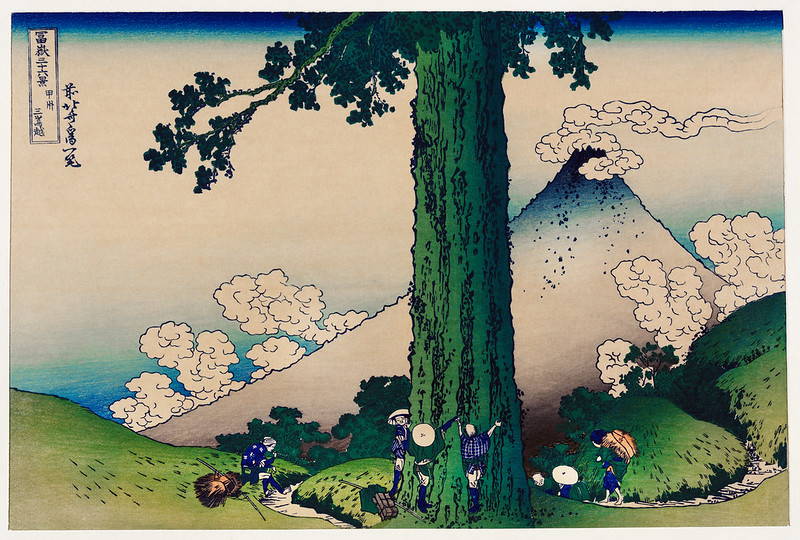 Shortly after the Mount Unzen incident when people were returning to some normality, there was a flourish of cultural upheaval and Japanese art was having a profound effect on its people, and indeed the world. Many of the French Impressionists cited Japanese woodcuts as major influences of their work. At this point, some of the truly great Japanese artists of the period were working, the greatest of them being Hokusai whose most famous piece was The Great Wave off Kanagawa. However, Hokusai at this moment would be still serving his apprenticeships and would be on the verge of leaving (or more accurately being ejected from) his Master's tutelage and branching out to discover his own style. He would eventually become one of the most famous artists the world has known. As fascinating as Hokusai's story is, there's a more mysterious one that happens over 10 months in the years spanning 1794 and 1795 where 140 prints were created and then would stop, and the artist would disappear, never to be heard of again.

Tōshūsai Sharaku otherwise known as simply Sharaku, would create a small but massively captivating and important body of work during those ten months. The Japanese tradition of beauty being held up above all else was cast aside from his work, and a more brutal and vigorous depiction of his subjects would be its staple. Sharaku's work can be categorised into four phases, the first focusing on the famous actors of Kabuki Theatre, the images were close up and unflattering depictions of the actors in character. Their postures would be hunched over and their faces contorted as they played the dramatic roles they were famous for. Many of these works have found their way into popular culture being used as images for T-shirts or the inspiration for tattoos. The late 1700s in Japan gave rise to a movement that would become known as Ukiyo-e art and that in itself is a fascinating subject and period to reflect on. The main subject of these creations being Samurai, Courtesans and Actors.

Sharaku's first period of work comprises twenty-eight prints created using traditional woodblock techniques. The surviving examples show slight variations in the printing techniques and applications of the same images, which indicates that they would have been printed over several occasions, this tells us that they were popular and multiple printings were needed to sustain demand.

One of his most famous images from this period being the one shown to the right, this image is Ōtani Oniji III as Yakko Edobei. We see the contourted face of the actor, eyes turned inwards and hands protruding from his Kimono with his elbows pulled back to make his arms look shorter than they are. This woodblock has been interpreted a number of ways over the years some hypothesising that Sharaku used artistic license to shorten the arms to make the character seem more intimidating and unnatural. 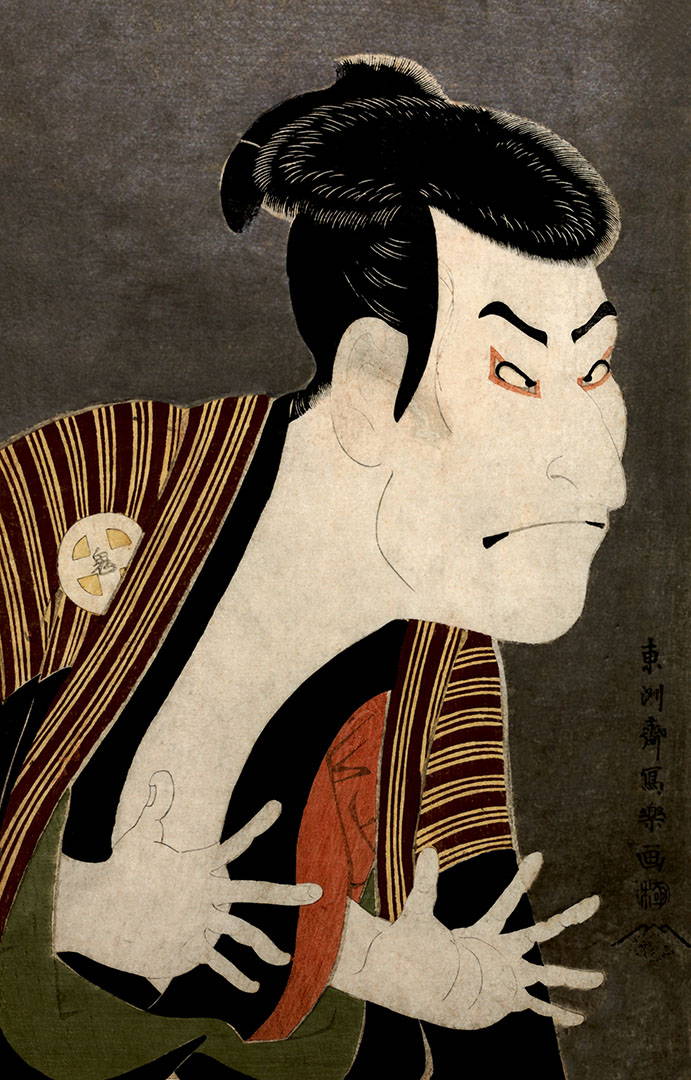 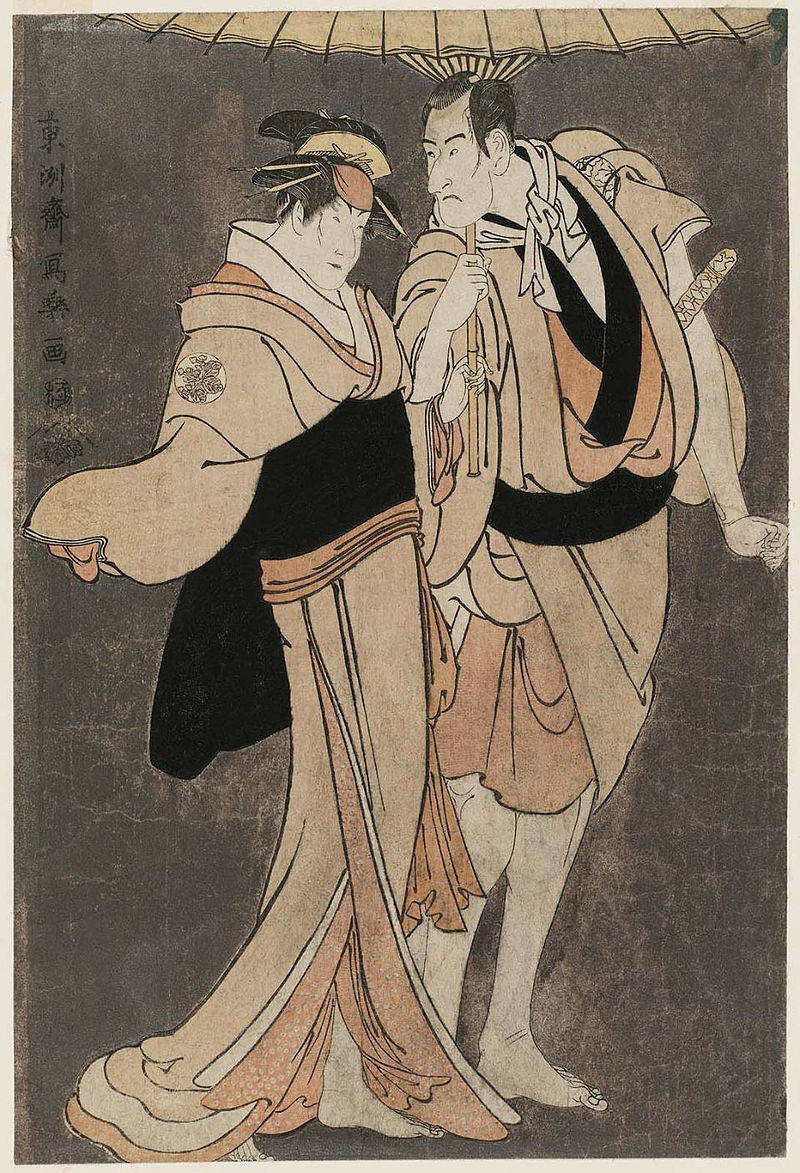 His second period is my favourite, with an output of thirty-eight prints we notice that Sharaku changes his subjects profile from quarter or half-length, to full-length examples, and the lines he uses to create the poses are simply divine. Again, he pulls no punches with the sitters and almost savours baring their flaws and catching them in embarrassing facial expressions, but at the same time gives an overall beauty to the pose and his careful construction of the image.

In his wonderful woodcut Ichikawa Komazō III as Kameya Chūbei and Nakayama Tomisaburō as UmegawaIf, we can take a closer look at the female image on the left. Although facially not the most flattering of images, the 'S' bend through her figure is particularly captivating. The old fashioned Kimono which drags along the ground around her feet, a far departure from the modern versions which are worn folded and pulled up to ankle height, clear of the floor. The layers of the garment can be clearly seen throught the folds around her lower legs, her hand suggestively grasps around the handle of the umbrella, which the male has in his hand. His face wrapping around the bamboo handle of the umbrella leaning in towards her, making it appear almost like his face is a mask attached to it.

His third period brings about the largest output of his oeuvre with a total of sixty-four prints being created, we also see a new subject of Sumo wrestlers. Many think this period of work to be the weakest of his art, they cite the added background as a distraction from the close-up portraits of his earlier work, which removes focus from the facial features of the actors. In my opinion, although I don't believe it to be his best period of work, I find these images quite captivating as historical and creative artefacts. There have even been suggestions that Sharaku was using apprentices at this point to help keep up with the demand for his work, although there is no proof for this supposition. His third period brings about a change in signature, he changes from writing his full name - Tōshūsai Sharaku and simply goes with Sharaku. Again, some people believe this to be a change from him individualising the work to becoming either so well known that he can be instantly recognised by the single moniker, or it is his recognition of creating a collective hive of collaborators who have all become Sharaku. 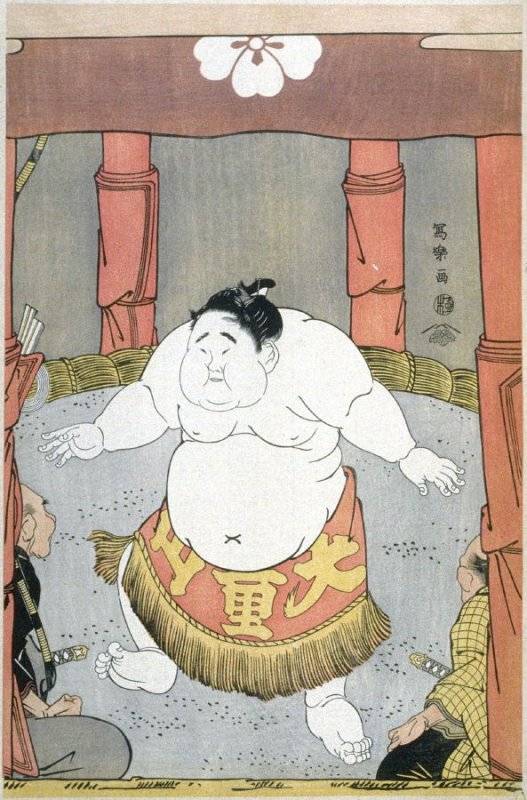 His fourth and final period is also his smallest output of work. Just fifteen prints were created, and this is undoubtedly the final curtain of the Sharaku phenomenon. These images had a higher degree of background in them and whilst typical of his subjects, they become more of a departure from his earlier work in terms of composition and focus.

His first and second periods focussed solely on the subject, that being the actor. In his later works more attention was given to the surroundings. As we see in this fourth period example, the background is incredibly detailed from the bamboo blinds to the tatami matts which cover the floors.  Here we can see details of textiles which adorn the walls and now having full length figures we see the detail in the full costume worn by the actor.  The lower half beautifully decorated with butterfly patterns and the colours harmonised from lighter pinks to reds.

So who was Sharaku? The answer is, we really don't know. Many biographers have researched over protracted periods to try and uncover the truth of his identity but record-keeping for non-royal or high born individuals in Japan was essentially non-existent during this period. The main mystery though, is why was his output so large and yet over such a short tenure? Was he an older artist who only found fame in the last year of his life, was he another artist who wanted to challenge himself by publishing under a pseudonym? Was Sharaku an actor who went back to his career after a flurry in the art world? Was it a woman who was forced to stop working by a husband or family? As frustrating as it is we really can't answer any of these questions, but what we can do is be thankful that we have this tremendously important body of work, representational of a period long gone, and we can see the faces of Actors, sumo wrestlers, and courtesans whom we would never have known if it weren't for Sharaku.

In Japan, the tradition of fireworks is as strong as it has ever been. They regularly hold festivals in their towns and cities, and every festival traditionally climaxes with a firework show. The kanji characters that make up the Japanese word Firework say Hanabi, Hana means flower and bi (or hi) means fire. So from this, we get a fantastic image of fire-flowers. Much like a firework and much like the tumultuous tectonic shifts that caused, earthquakes, Tsunami and volcanic eruptions during the 18th century in Japan, Sharaku burst into life with his art and then disappeared into the night sky only to be a memory. There is a poetry to that, and while it would be nice to know what happened and why the work stopped, I feel it's a beautiful juxtaposition of worlds from a period when information was scarce and shielded, to today when everything is known and laid bare for all to see.