Slipping through the cracks

The title of this week's blog is taken from an interview with Louise Bourgeois, the world-renown American Artist who is probably best known for her massive spider sculptures. During an interview before her passing in 2010, Bourgeois mentioned older artists and how certain ones are in danger of falling through the cracks. This, of course, refers to artists who work their whole lives but don't quite reach the top of the mountain and they can become lost in the ether of an overcrowded artworld where new is always 'better'. Many of you who follow our gallery and come in from time to time will know that I am not a slave to the brand new. As I sit here writing this now I look around the room and I have a 1975 John Piper behind me, a 1965 Elisabeth Frink to my left alongside two Julian Trevelyan's from the 1970s. Now I know I deal in some very big names in Modern British Art but even so, some of these artists could be in danger of becoming forgotten. There are certain artists who I know will continue to thrive, such as Lynn Chadwick, Allen Jones, and Joe Tilson as these three are all represented by very successful and current galleries. The problem with some artists legacies is that they were represented by Galleries who are no longer in existence or have categorically shifted away from their type of work. If we take artists like Pierre Adolph Valette, we can see his legacy has continued to develop due to several galleries stocking his paintings and keeping him in the public eye. Museums like the Manchester Art Gallery and Salford Art Gallery have large collections of Valette's work and they keep it on display for the public, again raising his awareness and keeping him current. Then you have books which have been written about him and this all adds up to exposure and more importantly keeping a healthy legacy.

With that being said, the opposite can be true for many other artists who have had thriving careers with galleries and sold-out shows. However, with these artists, if they don't leave instructions for what to do with their work when they die, they can leave a vacuum that well-intentioned relatives can find difficult to navigate and many mistakes can be made. Dame Barbara Hepworth was a forward-thinking artist and when she died she left instructions for her studio to be turned into a museum and the bulk of her work to be donated to the Tate, this why today she has two museums named after her, one in Yorkshire and one in Cornwall. Her work has also continued to increase in value, I see limited editions of hers that I sold ten years ago for £2000 now selling for £7000 and upwards. 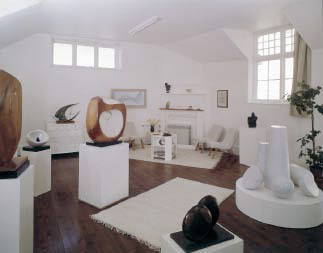 It's tempting when bequeathed a large amount of artwork from a well-known artist to hold sales of that work in large quantities to make money. When this is done two things happen - Firstly, the Market place becomes overloaded with the artists work and this can drive down prices. This doesn't solely affect art dealers but every person who has ever bought or currently own one or more of that artists work. You can suddenly find a painting you bought for £500 being worth half that amount as the market is flooded with new works. Secondly, you may get a short term gain of news articles and publicity but long term you've not taken a firework from the box and lit it, stood back and watched it cascade colours across the night sky, you've thrown the match into the box and everything has ignited at once leaving you nothing further to see.

These mistakes are indicative of a lack of future planning for the artist's estate. I don't blame the families of the artists; if they weren't left instructions of how to handle the estate it can be overwhelming. A more sensible way to sell off a collection of work, whether it be a bequeathed estate or a large collection from a relative is to work with galleries or museums (if they're interested) to showcase that artists work. Don't just work with one gallery in one city, if you're truly dedicated to keeping that person's art current and important then spread it around different areas, this way people will be more likely to talk about it on social media and keep both the artist's name and work alive.

As we speak some artists are hugely undervalued in the current art market and their work is in danger of becoming lost. If galleries don't support the good ones then there's a risk of going from people fighting to own their paintings to complete indifference. Look at Vincent Van Gogh, he sold just one painting and died thinking he was a failure, now people queue round the block to see his work. Look at Johannes Vermeer another Museum blockbuster artist, he was so underappreciated while he was alive that only 34 of his paintings are in existence today. Don't get me wrong, I'm not saying that Vermeer or Van Gogh were bad artists, only a fool would think they were, they were just never appreciated while they were alive, in many ways they were ahead of their time.

Louise Borgeous is right and if we don't support talented artists (not just the living ones) then we will see their life's work simply disappear; and that's a very sad prospect.