It's all about the Movement

Art movements can be confusing things if you don't know your Dada from your Fauvism. However, in reality, you don't need to know all of them. I'm going to list the most important of the Modern era and many of them you will probably already know or at least have heard of. So let's kick off with the earliest and most important of the modern art world:

Impressionism - You will undoubtedly have heard of this one and it's the most sought after and well-publicised of all art movements of the 19th /20th Century. People were fighting over these paintings and paying small fortunes for the chance to own one. The movement began with a group of far-thinking painters who were exasperated with the Paris Salon refusing to show their paintings in their annual show. So the group decided to hire a room over the River seine and hold an exhibition of their own. People turned up, paintings were sold and one critic decided to lambast the group in the local newspaper, he took particular aim at Monets painting 'Impression Sunrise' and referred to the artists collective as 'Impressionists' intending it to be a derogation. The group, however, took the name for their movement and within a few years, they were being regularly accepted to the Salon and were the talk of Paris and the world. 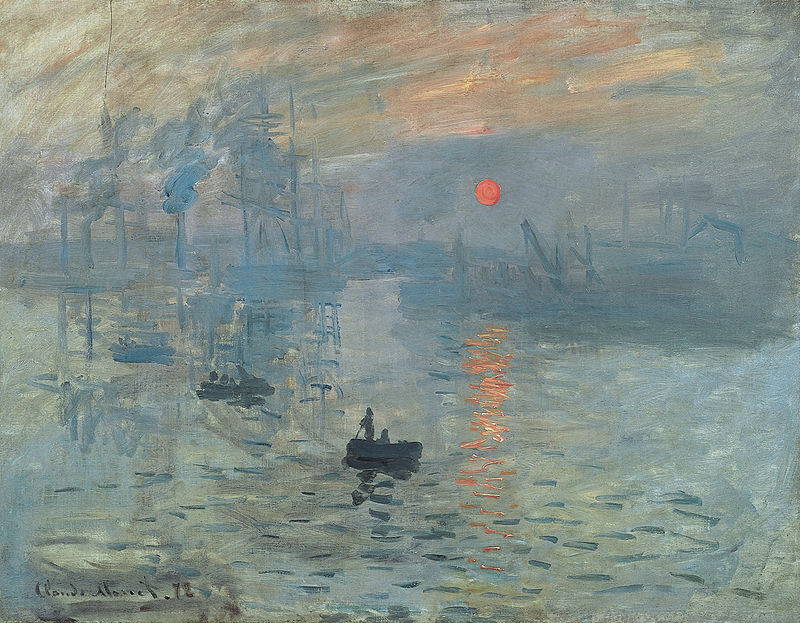 Post Impressionism - Sometimes referred to as Pointillism, is one of my favourite movements for both its aesthetics and my appreciation of what went into these works. The painstaking hours of applying paint in dots all over the canvas. considering this was 1895 - 1910 they were creating images in dots which is what modern-day printers and images are made up of, otherwise known as pixels. Georges Seurat was my favourite and if you're unfamiliar with his work then please have a look at it and imagine how painstaking the creation of these images was. 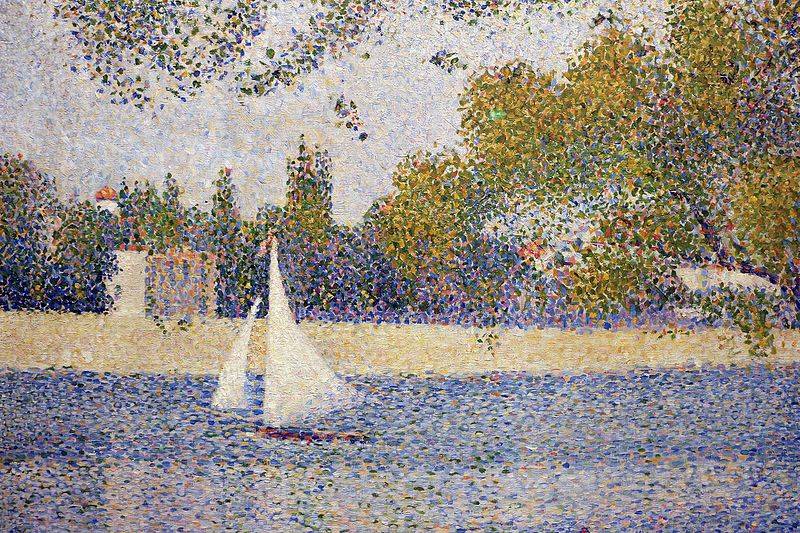 Fauvism - Was a movement associated with Henri Mattise and Andre Derain. These artists explored scientific theories with paint which utilised opposite colours on a colour wheel and when laid alongside each other would make the colours appear brighter. Les Fauves translates to 'Wild Beasts'. Again another term coined by critics in France to describe this groundbreaking work. Mattisse would be a huge influence in 20th Century art and indeed our own Sir Matthew Smith was a student of the great Frenchman. 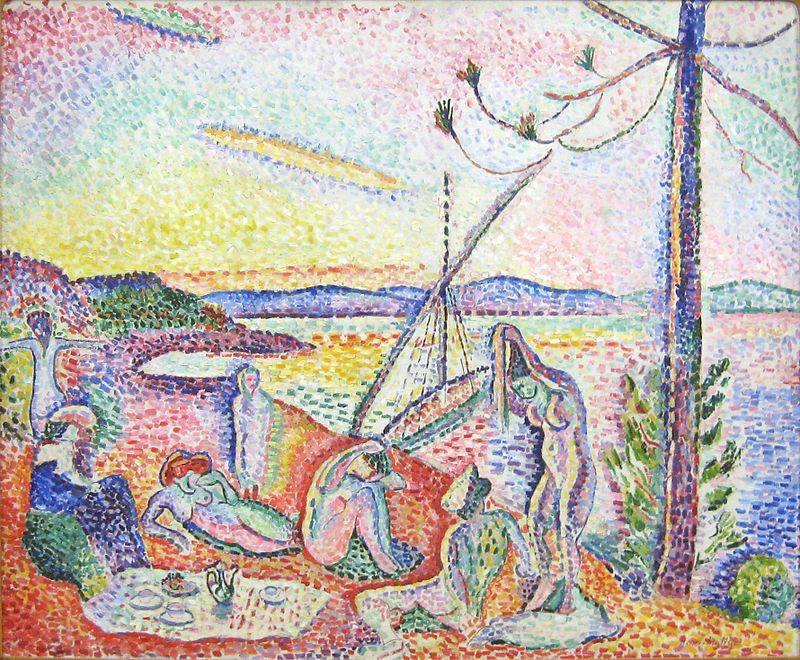 Expressionism - This movement was strongly associated with Germany and Eastern European countries, although its influence was wide-reaching. Edvard Munch and Wassily Kandinsky were the two leading proponents of this movement. Munch's masterpiece the Scream has been stolen a few times, held for ransom and was eventually found in a ditch and returned to the Museum. A limited-edition of the Scream sold for $2.5 million, making it the third most expensive print in history. This was an important movement in the history of Art it can be traced all the way back to Van Gogh's influence, and many artists have fallen into its category with different works, including Picasso, Giacometti, and Henry Moore, and lets not forget that this movement would give birth to one of the 20th Centuries most polarising movements - Abstract Expressionism. 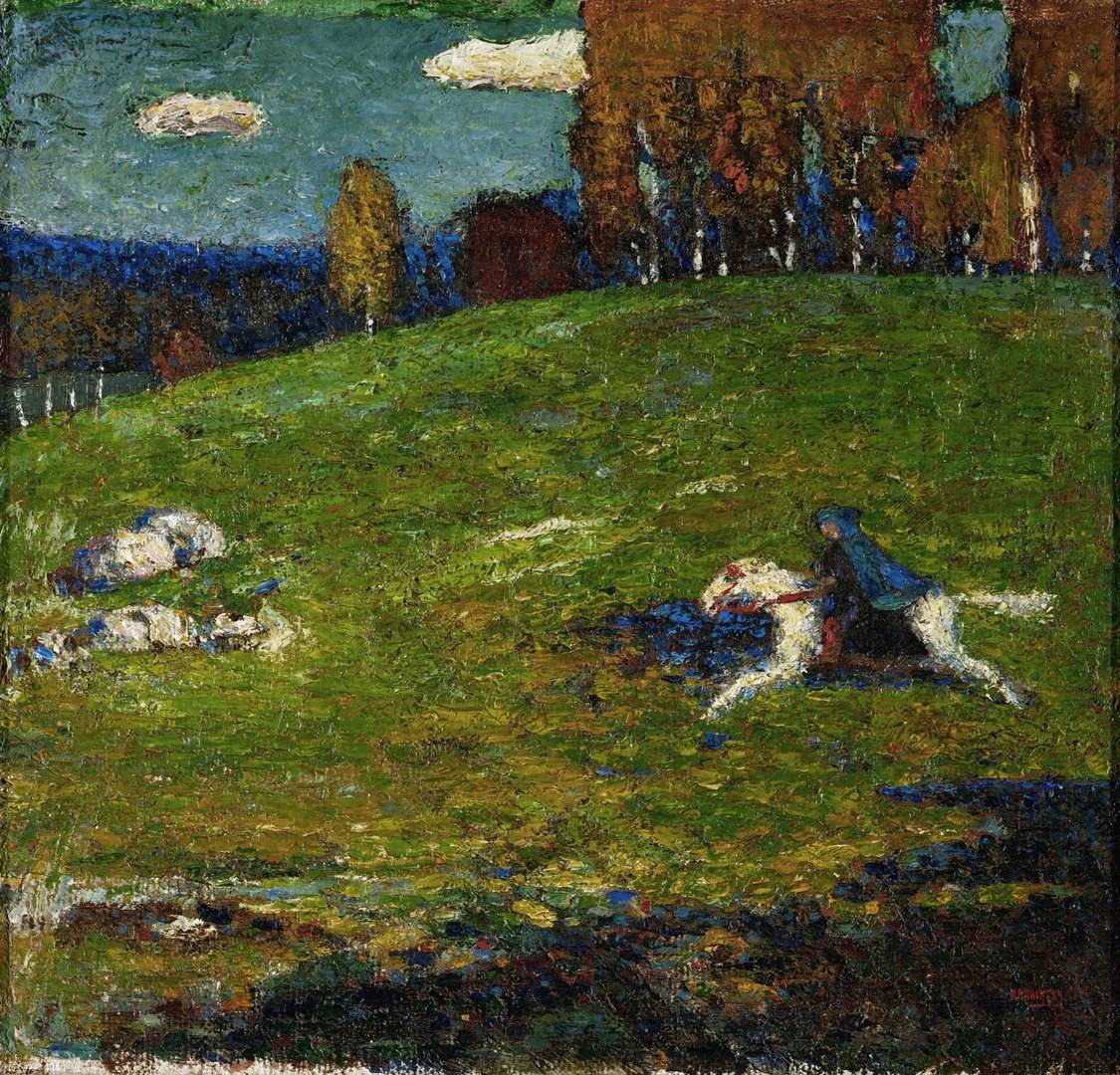 Cubism - Another one you will most likely have heard of. This movement is associated with Georges Braque and Pablo Picasso. Both artists pushed this style of painting utilising geometry to express their subjects. In fact, when Picasso was asked to speak at a political rally he had to take his first flight, which he was petrified of, but on the journey, he mustered the courage to look out of the window and was delighted to see the farmers fields below all split into different geometric shapes. He exclaimed to the fellow passengers - "Look it's like a cubist painting - I got something right". It can't be stated enough that the Cubist paintings of the early 20th Century gave birth to the revolution of alternative thinking and abstract art which would eventually dominate the century. 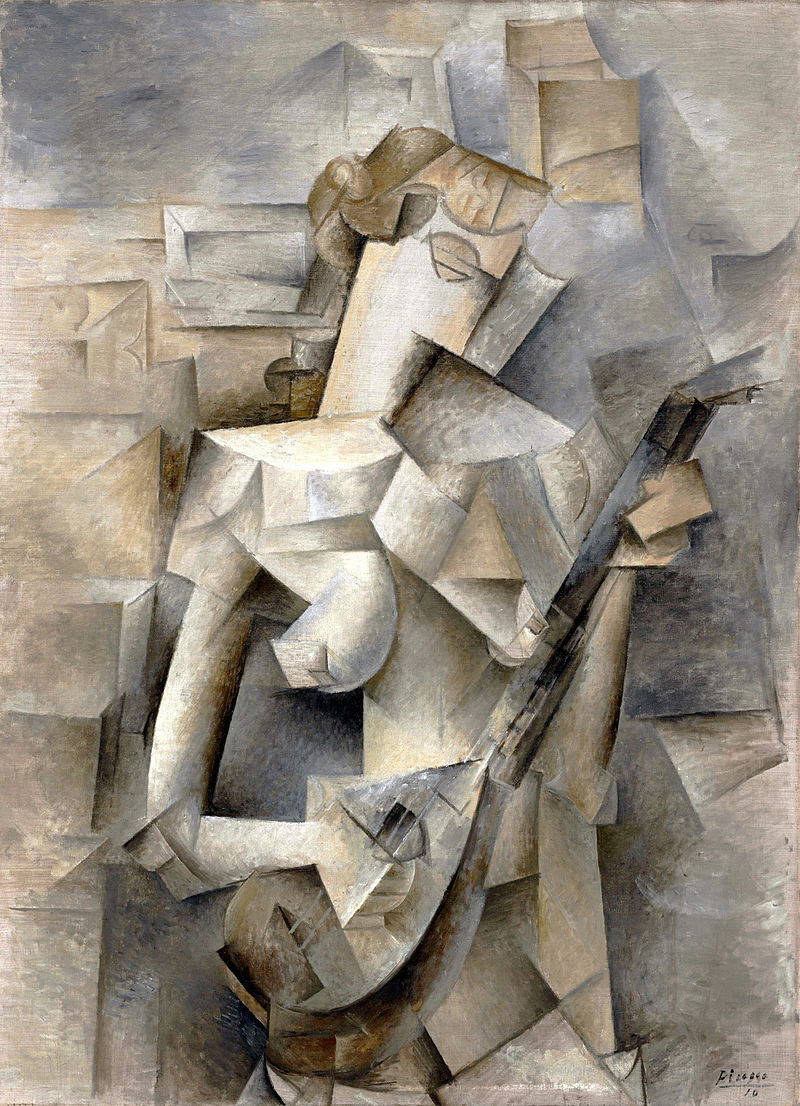 Surrealism - Another one that's pretty household these days. The Surrealists were a group of artists who wanted to transpose reality with worlds constructed in dreams and subconscious thought. It was wild and mind-bending, it made people look at things differently. Surrealism was a term coined by the Poet Guillarme Apollonaire (a close friend of Picasso and Matisse) and adopted by the leader of the movement - Andre Breton, although the poster boy for Surrealism would ultimately be the great Salvador Dali. His painting the Persistence of Memory is one of the most recognisable images of the 20th Century. 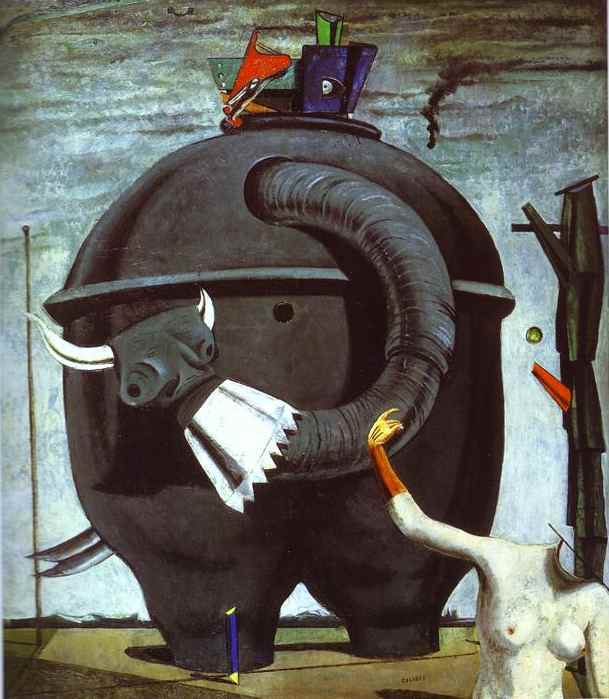 Abstract Expressionism - One of the most recognisable and still much sought after movements in modern art. This was a landmark for America and its history, this was their movement and it was the first time that something new had been created that made the Art world sit up and start to take American Art seriously. Before this Americans had been working in predominantly European styles, and Abstract Expressionism told the world that they were ready, not just to have a seat at the table but to lead the way for the rest of the world. Jackson Pollock and Mark Rothko were leading proponents of this style and although Rothko would visit the UK to see William Scott and work with him, many of our artists would travel to America to soak up the influence and the creativity that was flowing over at this time. 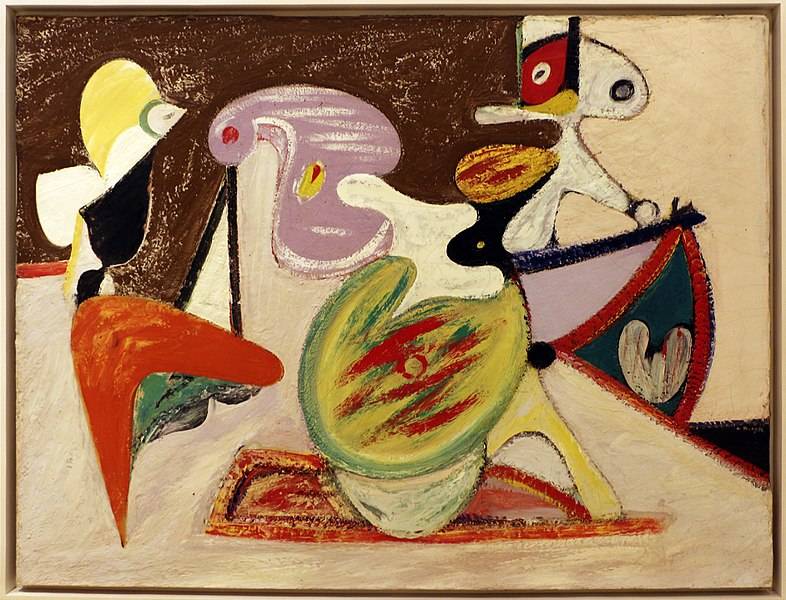 Op Art - This was a movement which wanted to fool the eye, if Surrealism and Abstract Expressionism had a baby, this would be the result. It was a geometric exploration of shape and colour to affect the eye and trick the brain. Bridget Riley and Victor Vasarely were the two most well-known artists for this movement. Bridget Riley, of course, being my all-time favourite artist and still very much alive and working today. She's had several major shows this year up and down the Country.

Pop Art - Another American born movement, and one that is still much loved today and often imitated. Andy Warhol was the king of Pop Art, he utilised every medium and explored every avenue. He was massively criticised for what he did at the time but his legacy supersedes the naysayers. His famous quote - "In the future, everyone will be famous for 15 minutes" has proved to be very true, I often wonder what he would have done with Social Media if it were available in his time. Roy Lichtenstein is another famous Pop artist, known for his comic book creations which utilise frozen frames of moments and language. Lichtenstein's genius is in his use of colour and tone. Most artists alter tone on the palette by either adding one colour or another to lighten or darken the original. Lictenstein, never altered the colours on the palette but altered the size of the dots in his painting to create an illusion of tone. 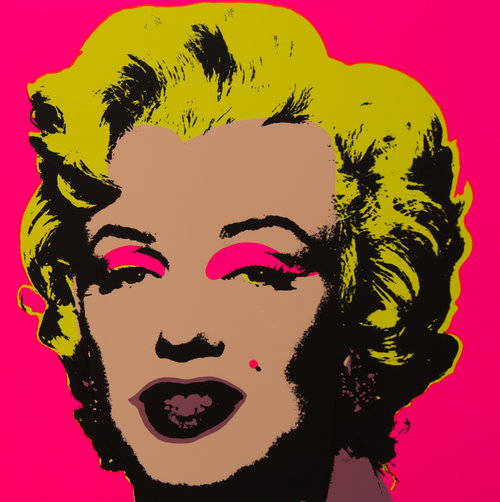 Arte Povera - This is a movement which translates to "Poor Art" it was the idea of adding things into the paintings. All manner of items were used from, soil, rocks, glass, paper, rope, and many more. We, in fact, have some work by Joe Tilson available right now which have small pieces of string interwoven into the paper. This would have been inspired by this movement. This was the first movement of the 20th Century to rebel against the financial and critical success of the other movements. Artists were becoming tired of hearing about superstars who were earning large amounts from the top galleries and auction houses. 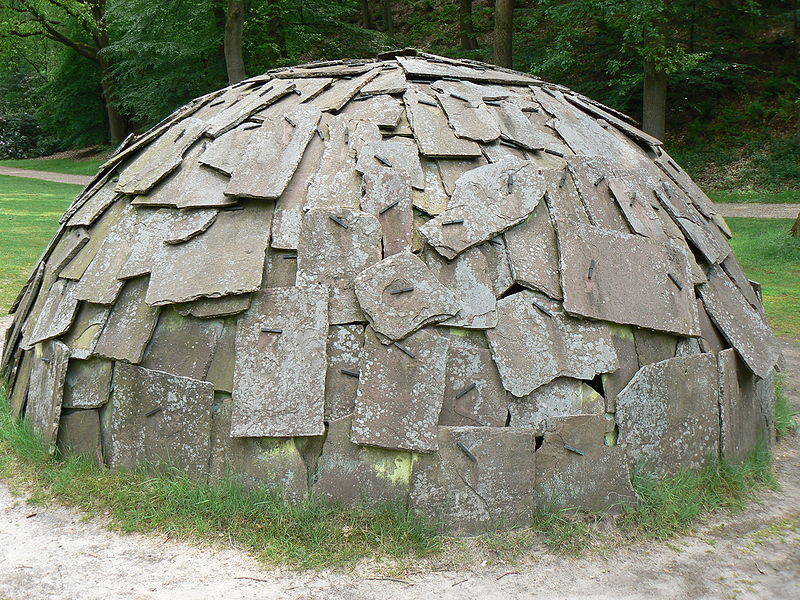 Minimalism - This movement has been cast in perpetuity by John Lennon and Yoko Ono in their famous music video for 'Imagine'. In this music video, we see the two in their large home which is painted all white and has very little by the way of decoration or furniture. This was the interior design equivalent of the Minimalist art movement. Whilst the decorating ethos rebelled against the rising consumerist culture of the 20th Century, the art movement was rebelling against the Abstract expressionism movement, and its use of colour and chaos. Frank Stella was the most famous of these artists, his large monotone canvases were hugely popular in the early 1960s.

Conceptualism - This was the moment when the artist did away with the paintbrush and clay and the artist became the artwork themselves. Conceptual art was intended to be a major rebellion against the capitalist grasp of the art world, although as with all things people have found ways to own these installations and performances. This movement probably causes the most outrage among the non-art community. The idea that the recreation of a bedroom or the repetition of a light being turned on and off again can be viewed as Art, is often too much even for the most ardent art lover. In the accompanying image we see a glass of water sat on a shelf in an art gallery. The board underneath gives an explanation of why this is an oak tree, although when it was taken to Australia to be exhibited, the customs agency refused to let it into the country as it was classed as foreign vegetation. Michael Craig Martin then had to then convince them that it was only really a glass of water and there was no tree. In the end he managed to pursued them and the piece was allowed to be dispalyed and ultimately bought and has never left Australia. 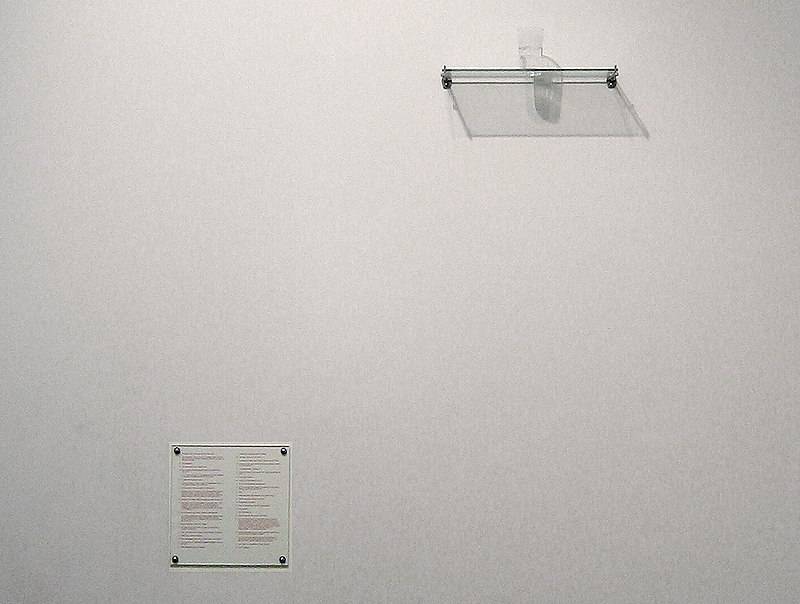 An Oak Tree - By Michael Craig Martin. Image By .The original uploader was Pixel23 at English Wikipedia. - Transferred from en.wikipedia to Commons., CC BY-SA 2.5, https://commons.wikimedia.org/w/index.php?curid=80169732

All Images are mine unless otherwise stated. All opinions are my own and not De Lacey Fine Art's or any other company or body.

It's all about the Movement- G Farmer 2019 © Copyright