It seems like I've written a lot of content on here since the very first blog post which was also about today's subject, the ever-surprising, never dull, Bristol street artist - Banksy.  I've also written quite a lot about the Venice Biennale in the last few blogs.  Those two worlds came together this week.

The history, the importance, and the massive attendance make the Venice Biennale the iconic art gathering it is today. Artists are nominated by a collective of their peers to represent their country on the world stage, and show everyone what cutting edge art in their country looks like. This year's show has been widely publicised and a few pavilions have certainly garnered the lions share of attention. The Lithuanian Beach, for instance, feels like it has been featured in every media story on the Biennale so far. 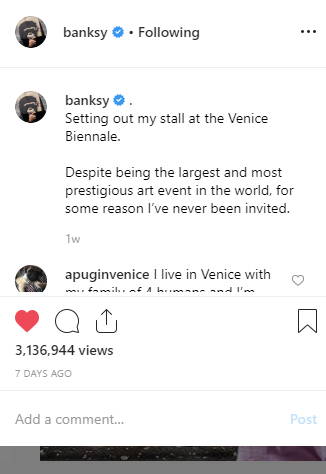 The reason I mention the criteria for representing a country is that our old friend Banksy seemed a little upset he hadn't been invited, so he crashed the party this week and grabbed his fair share of headlines.

In what looks to be the Piazza San Marco (St Marks Square) an 'elderly' gentleman rolled a cart up and began unpacking it. He removed easels, and framed pictures and began assembling his store. In total 9 paintings were removed and assembled into one giant image. That being a humungous cruise ship heading along the Venice canals and towards what would be a disastrous meeting with the Rialto bridge. The video that Banksy published shows the reactions of some of the people, which seem split, as some appear positive and some negative, which is about right for any art in the public view. Inevitably, before long the Police arrive and ask him to pack up and move along. There are several things that leap out at me from this, firstly the background of the painting is done in a similar colour palette and style to Canaletto. This is prevalent in every part of the painting with the exception of the gigantic white cruise liner, which occupies around 80% of the image. This is done on purpose to show the classic Venetian imagery that we've always associated with the great city.

Secondly, Banksy does the unthinkable, he paints a giant cruise liner into the centre of the image and blocks out all the classic vistas with a modern mechanical monstrosity. Thirdly he paints the cruise ship in a loose and more modern style. I'm not entirely sure if he painted the whole thing or if he took an existing image and supplanted the cruise ship right over it. I've never seen him do something like this before, if he has painted the whole thing then it's quite an achievement, although never for one minute assume that street artists can't paint, they most certainly can, they just choose to use spray cans rather than oils.

So the narrative of the piece can be translated a few ways. It could be a stab at the consumerist nature of people in modern society - this has been a great thematic well for Banksy over the years. It could be the current issue in Venice with the excessive traffic from cruise ships and Banksy is using his work to highlight the ridiculousness of the situation. Or it is most likely his stab at the massive tourist issue that plagues the historic city. The millions of tourists who flock there every year to spend time in the floating seaport do irreparable damage to the physical structure of Venice. The city is very old and when it was built was never expected to become a tourist attraction where people from all over the world would visit for 8 months of the year. Although I'm sure the financial benefits which come from that tourism is fantastic, the long term effects, however, have been telling on the city for quite some time now.

So that is my take on the Banksy stunt for this week...

'The Lord Giveth and the Lord Taketh away' - If Banksy were God, which if Instagram followers equated to religious stature I'm sure he would be. In the same week, he gave us a protest piece on the damage to Venice through consumerism, tourism and overcrowding of waterways - (He giveth) and then he goes and paints a mural on a wall alongside one of the canals on what looks to be a derelict property - (He taketh away).  It's a beautiful and painful image which is often the case with Banksy's work, the painting shows a child holding a flair in their hand and the smoke billows behind. The strong pink from the flare really makes this piece, it adds tremendous depth and a feeling of realism to the image. The child stands strong, arm raised with pillows of pink smoke behind them like a cape, yet they are looking down at the water below, not out towards us. 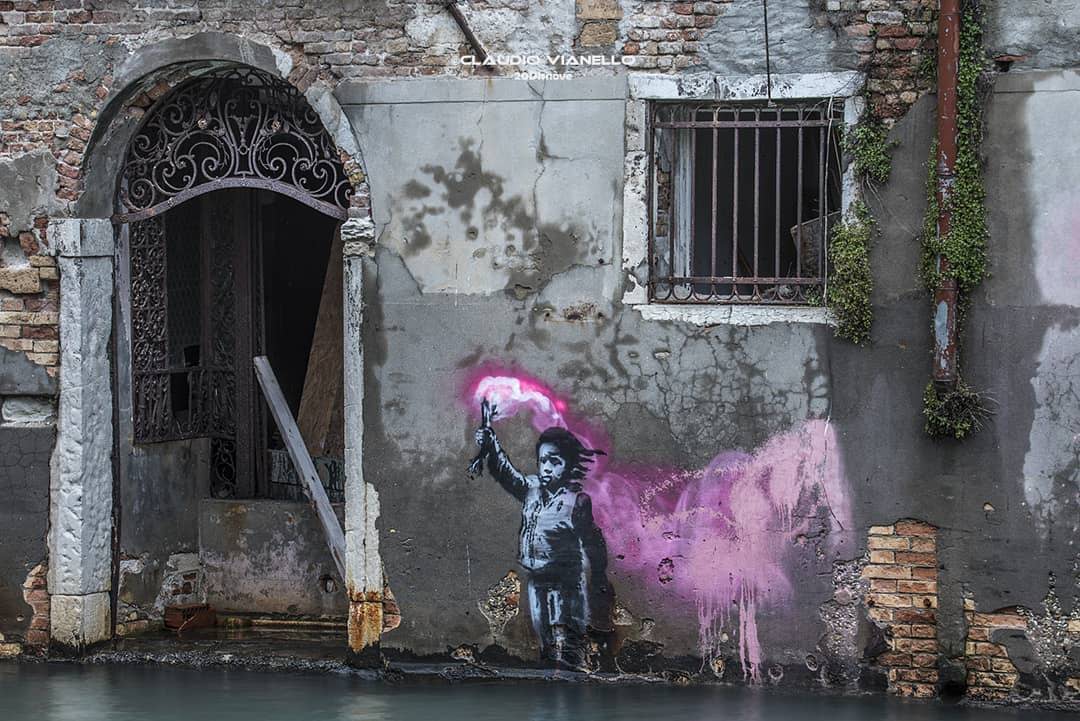 A few people have had a stab at working out what the piece is supposed to be saying. The general consensus is that it's another piece highlighting the plight of migrants in the modern age. This has historically been a strong subject for Banksy, but we'll have to wait and see if we get any more information on it to confirm or deny those theories. Personally, I think it's another commentary on the rising water levels of Venice due to overcrowding from tourism and the Environmental changes that are also contributing to rising water levels on the planet. If I am breaking down a painting or image I usually look at the main focal points in its overall composition. The first thing we have is a child in what appears to be multi-layered clothing which gives gravitas to the migrant theory. The flare is an interesting addition as I previously mentioned, it's the second focal point of the image. What do we use flares for? (I'm not talking about the 1970s fashion choice either). Flares are used to attract attention to something or someone. They are used in times of distress and are particularly associated with nautical rescues. They are also used in protests and riots. In this case, I think it's the former, the child is asking for help. The gaze of the child is also important. Banksy has positioned the piece just above water level. This means that it is now a marker for the rising water as the years roll on and if nothing is done to protect the city from sinking the mural will slowly become submerged and eventually consumed. The child is asking for help, they know the water is coming up and that is why their gaze is fixed on it. Banksy has ensured that this piece will draw attention to the rising waters in Venice more than any scientist or civil servant ever could. It will make everyone watch as it is abundantly clear that the water is rising in Venice. Very clever Mr Banksy!

I've touched on Banksy and hypocrisy before and it seems really poorly conceived that if you were protesting all those things we mentioned in the Cruise liner painting, why would you tag a wall and make it yet another tourist pull. You know that everyone in Venice will want to see this now. Boats will flock to that destination and the increased traffic will erode the walls of the buildings. Maybe it's a grand plan that he painted the mural in a very quiet part of Venice and he's trying to spread the tourists out to relieve the stress on the usual heavily trodden parts. Banksy is clever enough to do something like this. As of yet, I don't know if this is the case, however, he said this week that he's not yet finished in Venice.

Maybe he really is sore that he wasn't considered to represent Britain for the Biennale. Let's see what happens next.

For those that haven't seen the video yet here it is.