This week's Artist in Focus is Josef Heman, a Polish emigre artist who came to Britain and created some of the truly great paintings depicting working people. I was hoping to write a short history of his work and life but there is far too much that happened to this man for me to do him the disservice of condensing such a rich, tragic and interesting life. You'll see what I mean as you read. 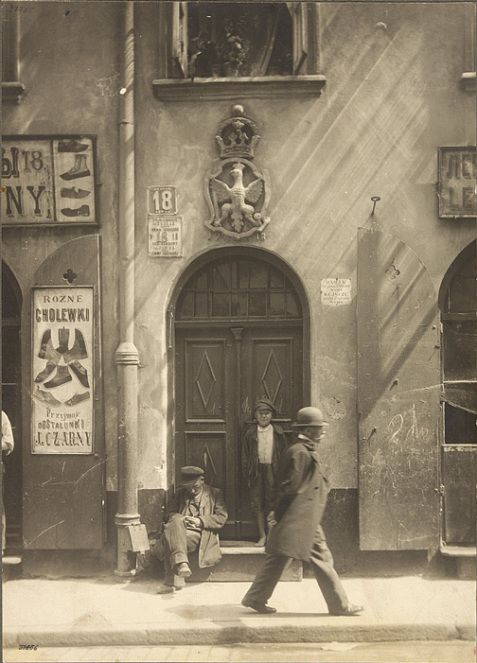 Josef Herman was born in Poland in 1911 and was one of three children to his parents. They were, for the most part, a poor Jewish family living in Warsaw. Although this wasn't always the case, Herman recalled one year when things were good for his family, his father was a part owner of a shoe factory and the business was beginning to make money. The family were enjoying the financial benefits of the fathers successful business, but it wasn't to last. Sadly his father would eventually be conned out of his share of the factory. One day his business partner came to him and asked him to sign a document, Josef Herman's father was illiterate and didn't know what he was signing, his signature consisted of three X's. With those three X's he sealed his and his families fate by relinquishing any claim to the company. The next day he came to the Factory to work and was turned away at the gate. After that their life was one of poverty and difficulty, while his business partner sold the factory and moved to America.

The family struggled to make ends meet, they had their Mother Sara, Father David and three Children, Josef, Smiel and Zelda. They also had the grandparents living with them. Work took on the form of anything they could do. The Grandfather worked as a street porter - which was someone who would wait on the side of the road and if anyone needed help lifting something heavy or was unloading cargo, he would do this and ask for a small amount of money in return. Josef's Father David worked on the street too, but as a repairman, he would approach people and fix things for them. Although Josef recounts this as a very difficult occupation due to the street fights that would occur between the various vendors. Eventually, David would quit this work and go on to sell vegetables.

Young Josef Herman went to school from aged 7 to 12 and once his education was finished he was to look for work, which he found in a small printing shop which made books and letterheads for companies. This was a job he really enjoyed and was good at, but one day his co-workers decided to play a practical joke on him and added a printing type in his sandwich, which he was supposed to bite into and then spit out in disgust and give them all a good laugh. However, Josef never bit into the type and instead swallowed it. This normally wouldn't have been a problem but the type was made of lead and gave him lead poisoning. He went to the doctor and had his stomach pumped and was told he could never go back to the printing house because he would now have a weakness to any lead products. Josef couldn't afford to be dissuaded from his job so after a short convalescence he returned to the printing house. He worked for three or four different houses and excelled in all of them. It was this love for typography that led him to graphic design and art in general. Although the poisoning would stay with him for many years, he would feel nauseated whenever he was around printing houses. He later remarked that even when he was making lithographs he would feel nauseated after the second or third day in the printing studio. While he worked in print, he was striving to forge ahead with his painting. He made friends with other artists and joined an artist group. He had a huge admiration for the work of Chagall which if you look at his early paintings you can clearly see a strong influence. 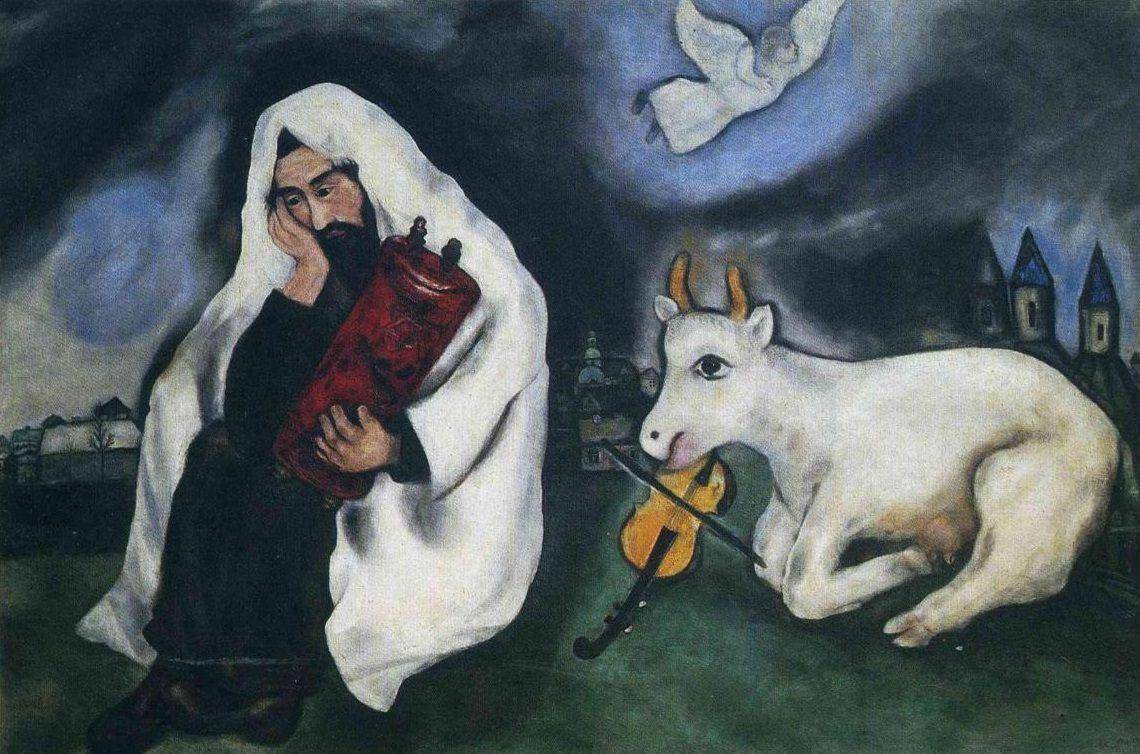 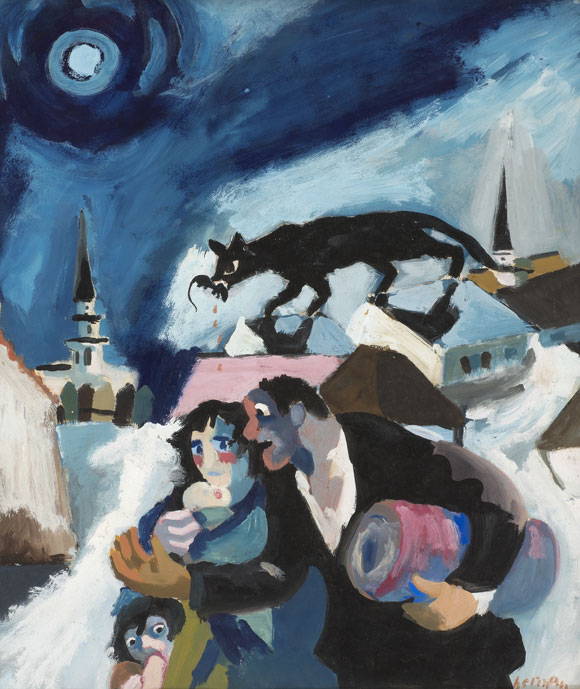 In 1937 Herman began to fall in love with Flemish art and particularly the work of Pieter Bruegel. He set his mind to moving there and painting. At this time, the Nazi's were beginning to make noises about Poland but nothing had yet happened by way of invasion. Oblivious to this, Herman was making the right choice to leave Warsaw albeit for completely artistic reasons. Getting a passport however, was another matter entirely. The Fascist government of Poland wouldn't give out passports to Jewish people, but as with all governments, things could be made to happen if the right people were paid.   Josef's friends raised some money for him and got him a travel passport which would last for two weeks, but he had no intention of returning. Josef's plan was to work in Belgium, to become successful, and bring his family over to live with him. He described Belgium as a paradise in his mind. He had come from Warsaw where the police were to be feared and avoided. When he arrived in Belgium he walked past a Police officer and he smiled at him, which totally left him in awe. It was the first time he'd seen a Police officer offer a man in the street anything other than disdain and violence. He loved the freedom that Belgium gave him and he wanted that for his family. Josef would integrate with the Artists of the day and become friends with many. Constant Permeke would be a great friend to him and introduce him to other artists, dealers and collectors. Herman was based in Brussels but would travel all around the Country taking in the sights and drawing all the time.

He enrolled in a local art school because they had life models which he could draw and paint, without money he couldn't afford to paint the human form as he could barely feed himself let alone pay for models. Herman would later say that when he was young he had great respect for teachers although as he aged and grew with experience he knew that an artist was shackled by their teachers, and it was the artists challenge to escape those shackles and drive their work in new directions. Herman was taught by a man called Alfred Bastion at the Beaux-arts academy in Brussels. Bastien even went with Herman to the Polish Consulate to get his two-week holiday passport extended so he could pursue his art. 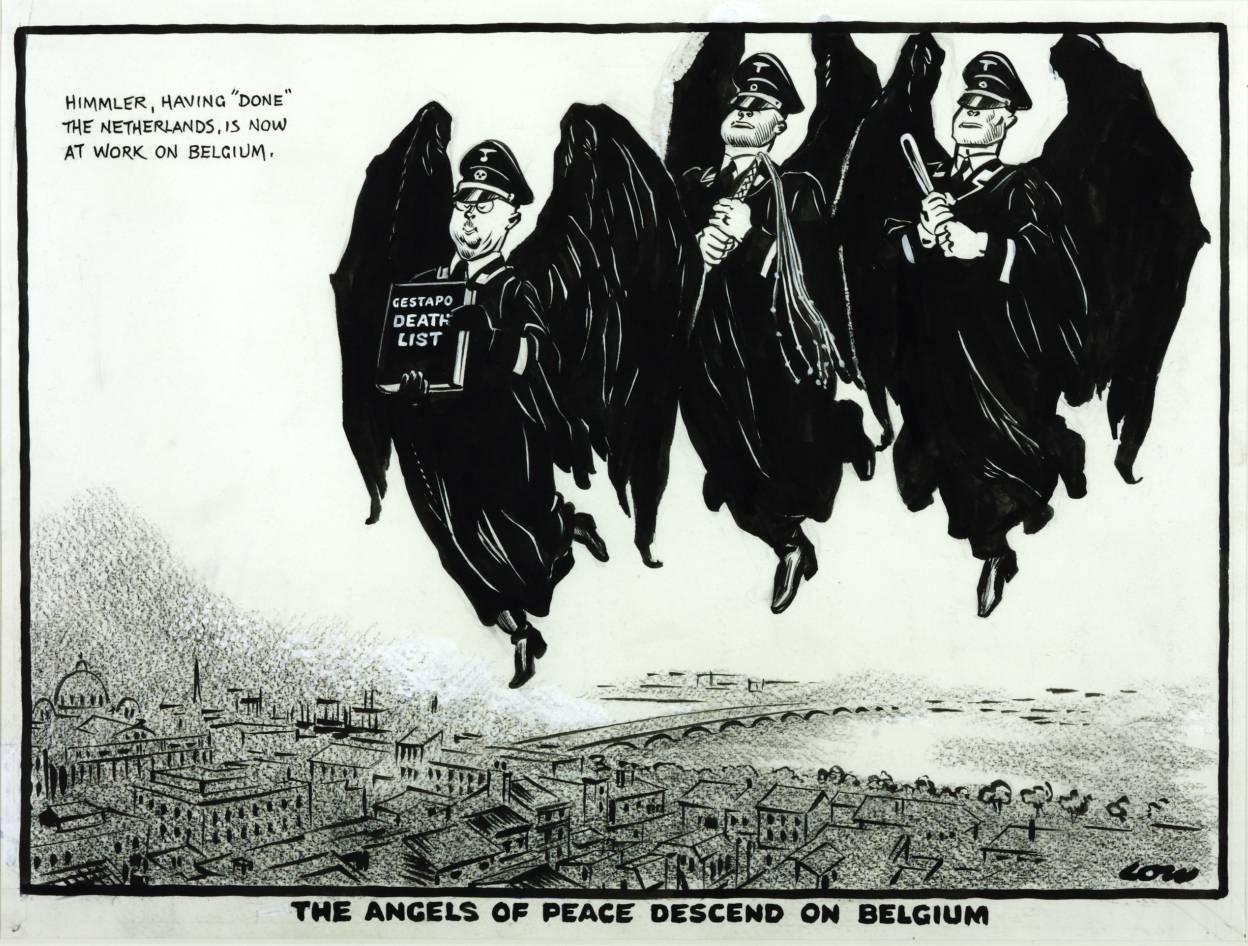 'The Angels of Peace decend on Belgium'

Josef found he could make good money in Belgium, this was greatly helped by the support of an art critic called Robert de Bender, who championed his work and got him exhibitions at local galleries. This led to a decent income for the young Herman. However, just when he was getting settled and making a name for himself in Belgium, the German Werhmacht  was once more heading his way.

In 1940 the Nazi's were on the move, they had taken Poland and were now looking at Belgium, Holland and France. Josef Herman knew he had to leave the Country he loved and where he had been so happy. There was a difficult decision to make, either head to Spain or France. He chose France. Josef was walking down a road when a girl in a car stopped and offered him a lift, the American girl said she was planning on going to Spain. She had no idea that there was a War heading towards them. Josef told her what had happened in Poland and now they were heading to Belgium. He later described his travel companion as very easy going and generous, she took him all the way to Bordeaux and never asked for anything in return. Josef said his goodbyes to the American girl and sat in a cafe at the port which was already on fire from a German bombing run. He could hear the guns in the distance and knew he had to keep moving. At this point, serendipity intervened and he found himself sat next to a table of Polish military officers who were talking openly about their plans, as they thought nobody could understand them. Josef being alone and recognising his native language began to listen as they laid out their secrets to escape France. They spoke of a ship leaving La Rochelle to head to Canada and Josef knew he had to be on that ship if he were to survive. He ran out of the cafe and began looking for the American girl who he found at the train station trying to get a ticket to Spain. He explained what he had heard and she being the generous soul that she was, agreed to drive him to La Rochelle in the car she had abandoned just moments earlier.

When they arrived at La Rochelle they said their goodbyes and Josef headed to the ship. The queue was massive and at the head of it was a large group of armed soldiers, he knew he didn't stand a chance of getting access to the boat. When he left Belgium he had dressed in a Beret and Leather jacket. He chose the jacket because he thought it would be better at keeping the rain out than any other garment he owned. As he turned away from the queue despondent, a soldier stopped him and asked, "Where do you think you're going?" he explained that he knew he wouldn't get on the boat and he was leaving. The soldier took him by the arm and sat him down alongside a group of men - all wearing Berets and Leather Jackets. What Josef didn't know was that this was the common dress for Polish airmen during the War, and the soldier assumed he was one of them and got him a place on the boat. That was the first surprise of the day. The second was when the boat docked at its destination which was not Canada, but Liverpool, England. 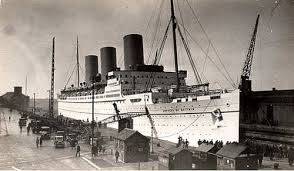 Next week I'll contuinue the story of Josef Herman's life. I am massively aware that when I sat down to write this in many ways I over wrote. I had a word count of 2678 for this story and I realised I had only arrived at the point in his life were Josef Herman was thinking about going to Wales, which for those of you aren't familiar with Hermans life is still relatively early in his career. This will most likely be in three or four parts.

I hope you enjoyed it and will catch up with the second part next week.

Images are not our own and are from various sources - links supplied.

All opinions are my own and not De Lacey Fine Art's or any other company or body.
Copyright G Farmer 2019